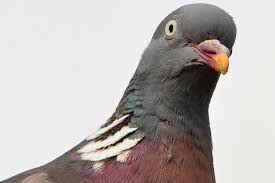 Pigeons! Urbanites often consider them winged pests, property owners take measures against them, but the pigeon happens to be one of the most intelligent birds on the planet, not to mention a wealth builder, hero and diagnostician. It may blow your mind to learn that…

…the Rothchild family owes much of its wealth to the pigeon. In the early 1800, the family set up a network of pigeon lofts throughout Europe to send messages between its financial houses, helping them stay ahead of the competition.

…pigeon guano (poop) was an invaluable fertilizer in the 16th, 17thand 18thcenturies in Europe. Armed guards were stationed at dovecotes to prevent theft. Also, in 16thcentury England, pigeon guano was a highly valued commodity since it was an essential ingredient in gunpowder.

…after only two weeks of training, pigeons can spot cancer in medical images, making correct diagnoses up to 85% of the time! The pigeon is also able to recognise its reflection in a mirror, all 26 letters of the alphabet, differentiate between two different human beings in a photograph when rewarded with food. Must keep the poop machine going after all!

So give the darn pigeon the respect it deserves, y’all!

To hire Irena to write, edit, or rewrite something:

To find out more: